This is the second part of the Kitchen Essentials series . Whether you’re stocking a new kitchen or just updating a few things, this is a great place to start.

A few years ago I had a part-time job in a nearby cafe. One of my coworkers was a professional chef who’d recently moved to the city, and was working there whilst looking for a full-time restaurant position. Her skills in a number of areas were far greater than those of everyone else in the kitchen, so it came as little surprise that she brought her own knives to the job. 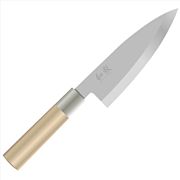 After using them a couple of times I realised that there was an enormous difference between these superb tools and the cheaper options scattered about the cafe. They were well balanced, easy to clean and incredibly sharp. Superb.

It was then that I stopped using my cheap set of knives at home (ones that had come free with a knife block), and went out shopping for something a little more serious. If you don’t have the luxury of going knife shopping with a chef, here are a few things to keep in mind.

The first thing to determine is the number of knives you will actually need. No doubt you have seen enormous sets of knives displayed on the walls of department stores – 50 or more knives to cover every possibility.

Ignore these – at least the idea of owning a complete set. In most cases you will only need 1.

However, your choice of knives will depend very much on the things you regularly cook. These 4 will cover the majority of uses :

Personally, I use the first one (a large chopping knife) for most things. If you’re only looking to buy one, start here.

What kind of Knife?

This will depend on the size of your hands, needs and budget. The main things to look for are :

Size : The stated size refers to the length of the blade. The overall length will be almost double this.
Weight : The weight of the blade varies considerably, and your decision comes down to personal preference.
Style : Eastern or Western (see below).
Maintenance : how long will you spend sharpening it? How often?
Price : By-and-large, with knives you get what you pay for. They will, however, last you a lifetime.

A little understanding of how knives are put together will help you narrow down the options. Here’s a quick rundown.

Knives are made of several parts :

Blade : The edge that cuts
Spine : The back of the blade
Tip : The front section of the blade, used for delicate cutting
Point : The sharp point at the end of the tip, used for piercing
Tang : The section which carries the handle
Bolster (optional) : A thick section of steel in between the handle and tang

Commercially there are three techniques used to make knives (or their components). These are :

Block : Knives are cut from a sheet, similar to the way cookies are cut from dough. They are typically light, poorly balanced and inexpensive. A bolster is never included.

Forge : A steel blank is made and then pounded into shape; either by hand or with a drop forge machine. This method provides a thick bolster (which is not economically viable using other techniques), and the knives are typically strong and sharp.

The Henckels site shows this process in action.

Sinter : These knives are made by fusing together the blade and tang. This may be done as an economy measure, or to enable construction of otherwise impossible forms. These knives typically fall in between those made by block or forge; particularly in terms of price, balance and strength.

There are two basic styles as far as the cutting edges are concerned; these may be thought of loosely as Eastern and Western. For simplicity I’ll address the Japanese and German brands, which together account for the majority of those on sale (at least in the forge and sinter categories).

Japanese knives are typically made from a harder steel, which allows the blades to be thinner (and therefore lighter). The bevel angles are also slightly more acute, and the blades are generally sharper. These knives will also hold an edge for a longer period (they last longer before needing sharpening); the only negative is that the sharpening itself takes a little longer.

German knives are made from a slightly softer steel than their Japanese counterparts, have a different shape (and this is where personal taste comes in) and are quick and simple to sharpen. Their blades tend to be a little thicker (and heavier), and they will require fairly frequent maintenance (sharpening).

Keeping a knife sharp not only makes it easier to cut things, it reduces the chance of injury. A dull blade is much more likely to catch on something and end up testing itself on one of your fingers.

If you’re wondering how often to sharpen your knives, the answer is a simple one – whenever things become difficult to cut. That’s really all there is to it.

When it comes to the process itself, there are three basic methods. A steel (that thing that looks like a round sword) may be used, a grinding stone or a dedicated knife sharpener. There are pros and cons for each.

Steel : If you’ve ever come across a knife block in a department store, randomly grabbed one of the handles and thought ‘what’s that for?‘ – chances are you were looking at a steel. This is a long, heavy, round piece of, well, steel.

A steel essentially ‘smears’ the edge, or straightens it a bit. This has the effect of sharpening it.

There are a couple of ways to do this, but the general idea is to hold the knife at an angle of around 22.5 degrees (it’s easier to think of it as 1/4 of a right angle). Moving the knife (the steel stays in place), slide it up the steel at this angle. Turn it over and slide it back down, again at 22.5 degrees. Repeat a half-dozen times or so.

Click the above picture for video of Harvest Eating‘s Keith Snow demonstrating this technique. 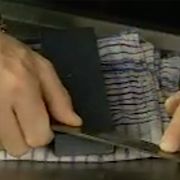 Stone : Ever seen a key being copied? (and I’m not referring to the putty method favoured on crime dramas). Sharpening a knife using a grindstone is a similar process. Essentially the blunt area is cut back a bit, revealing a sharp blade.

NB : there are stones designed for use with water (such as this one

) and others for oil. The overall technique, however, is almost identical.

Click the above picture for video of The Cook and the Chef‘s Simon Bryant demonstrating this technique (see Sharpening Knives).

Sharpener : These come in many forms, and are perhaps the simplest for home use. A knife is drawn between two stones held at predetermined angles, working in much the same way as the grindstone method above. This is the simplest solution.

Many knives – particularly the more expensive brands – do not like the chemicals commonly found in dishwashers. If your knife doesn’t explicitly say ‘dishwasher safe‘, wash it by hand.

The first time you effortlessly slice through something fairly tough (pumpkin, pineapple, turnip etc) you will fall in love with your knife. Throwing it in the drawer with everything else just isn’t an option.

Knife block : Perhaps you already have a knife block that fits your knife. Just remember to store the knife with the weight on its spine (blade pointing up). It’ll last a little longer between sharpening sessions. 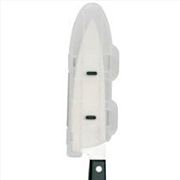 Blade protectors : These are plastic sleeves that slide over the knife, protecting the blade from other nearby items. The knife will probably come with one.

On a shelf : If you use your knife as often as I do, keep it handy. Store it on an easily accessible shelf, or in an uncluttered drawer. Lying flat, of course.

NB : When you want to take the knife travelling, a knife roll

is a great way to carry it.

How long will it last?

A good knife will last for several generations.

What type of knife have I got?

For nearly all uses I have a 9″ (I have fairly large hands) Japanese Cook’s Knife made by Henckels. Japanese style, German make. A beautiful thing.

I realise that there’s a lot to think about when it comes to buying a knife, and that you aren’t going to make a decision in the next ten minutes (even with a chef at my disposal, it took a bit of work).

However, the most important thing to remember is :

Buy one knife, and make it a good one.

This is the second part of the Kitchen Essentials series. If you missed the first part, here it is :