Having access to any sort of information – in real time – can help make almost anything more effective. A car’s speedometer, a wristwatch; that thin red line you see on televised swimming finals.

When it comes to energy use around the house, this idea certainly holds true. Having an idea of the amount of electricity, water, gas etc which is being used can help you make real changes – quickly. And as you’re likely to be saving money in the process, the first place you’ll notice the benefits may just be your utility bills.

As with most things on the market, there are a number of options when it comes to energy monitoring. Here are a few of my favourites. 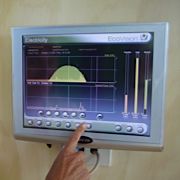 The EcoVision – shown the other night on The New Inventors – is a real-time, touch-screen display for your home that shows the household’s current power and water consumption. The system is also geared for group or community use – showing the consumption levels of a communal building or small town.

Future versions of the device are expected to collate national and global data.

My thoughts on this : although it’s a great idea for new homes, it isn’t – yet – ready to be connected to existing houses. Once it does, and the price of touch-screen displays drops, it will undoubtedly take off. To see more, watch the New Inventors segment, or head over to www.ecovisionsolutions.com.au.

NB : You may also be interested in the MorePower Multi, which is heading along a similar path. 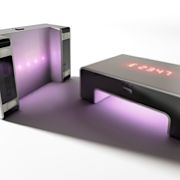 This is at the stylish forefront of energy usage monitoring, and looks the part (as well as acting the part). In terms of functionality, it simply monitors how much electricity your house is using, and displays that information in the form of coloured lights and the cost of the power.

My thoughts on this : whilst it’s clearly a good-looking device (and made Stuff Magazine‘s ‘Cool Gadget List‘ last year), it’s a little on the expensive side. For energy-monitoring, at least.

NB : There are a number of devices similar to this – with varying prices – such as The Owl (formerly the Cent-A-Meter, known as Electrisave in the UK) and the Efergy. 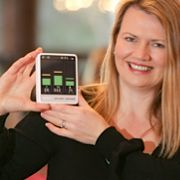 Developed by Scottish inventor Tanya Ewing, the EWGECO is a small, hand-held monitoring device for tracking electricity, gas and water consumption. Once it learns your ‘usual‘ consumption patterns (which takes about a week), it’ll display – in real time – whether you’re higher or lower than this; and by how much.

At the moment it’s for business use only; a household model is due out shortly. More info is available on the EWGECO site.

My thoughts on this : the integrated electricity/gas/water approach makes a lot of sense to me; as does the small, handheld idea. It’s now possible to think of this offering as part of another device, such as a cellphone or television. 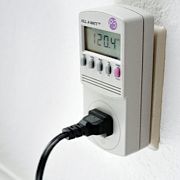 The Kill-A-Watt is much like a double-adaptor with a screen; quickly identifying the electricity usage of any device plugged in to it. A handy way to check up on your existing appliances.

My thoughts on this : although it may seem to have a limited use (after all, it’s only for one appliance at a time), it’s nice and cheap. Around $20 on Amazon

NB : Devices similar to this include the Prodigit 2000M plug-in mains power & energy monitor and the Brennenstuhl PM230 Electricity Meter.

If you’re not in a position to spend money at the moment, there are still a couple of things you can do. The first is to grab as many of your electricity bills (from that house) as you can, and get an idea of the amount you generally use. Watch for seasonal changes, which may be an air-conditioner, pool cleaner or heating system.

The second is to use one of the free online calculators, such as this one (US only). This will give you an approximate breakdown of your electricity usage.

These devices all have one thing in common – they make it easy to keep an eye on your power consumption; reducing your power bills in a number of cases. Whether your goals are environmentally-based, or simply related to saving a bit of cash; monitoring your energy usage is well worth considering.