[ Note: This article was written by fitness and nutrition author Jon Benson. I have his permission to share it with you. Jon is the author of the Seven Minute Muscle Workout] 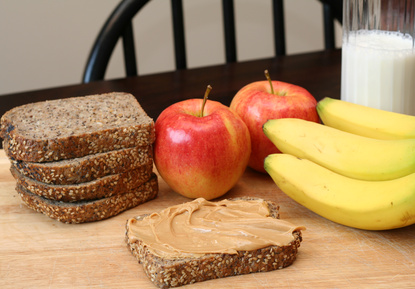 One of the most common questions I get asked is:

“What should I eat before my workouts if I want to get rid of bodyfat?”

I’ve been saying this for almost a decade now… and research is catching up with the idea.

Several studies now confirm that exercising while your body is low on food may be a good way to trim excess fat.

European researchers found that cyclists who trained without eating burned significantly more fat than their counterparts who ate. Now, this is important: Cycling requires a LOT of energy. Far more energy than you need to get rid of bodyfat.

Working out with weights and doing moderate to intense (but short) cardio will take care of 99% of your needs when it comes to fatburning.

But with weights, and espeically with the cyclists that were tested, performance may be an issue.

In fact the members of the group of cyclists that didn’t eat performed worse on the intensive training. Still, they burned a higher proportion of fat to carbohydrates than the group that ate. (Medicine & Science in Sports & Exercise, the journal of the American College of Sports Medicine.)

Why? Simple. Your body’s blood sugar is lowest in the morning prior to eating. When you train, moderately or with intensity, most of your fuel comes from your bodyfat and NOT ingested carbs. Isn’t that cool?

Which would you rather burn… bodyfat or carbs?

This was not a lone study on fasting and training. In a 2008 study, Hespel and colleagues tested the effects on men who did endurance training without eating versus those who ate. In the athletes who hadn’t eaten, the researchers found a spike in the amount of proteins needed to process fat, meaning their bodies had been primed through fasting to get rid of more bodyfat.

So, now you know the answer to the old question: “What should I eat before training?”

Nothing… or as little as possible.

P.S. If you want the best diet possible to turn your body into a fat-burning machine along with my personal workout plan for fasting cardio… and a plan that works in your favorite foods too … then look no further than this: